With a slew of premium racing games on the mobile market, it may be hard to stick out from the crowd. Speed  Racing, for Android, attempts to do so by offering a free-to-play racing game.

At its core gameplay, Speed Racing revolves around you speeding up a straight road, dodging traffic while collecting coins. To steer the car you tilt your device and you simply tap the screen to accelerate. The responsiveness is a little sluggish, especially at high speeds. There are also boosts you can use to attract the coins, become invincible for a short period, and things of that nature. You continue driving until you crash and lose your health. It’s straightforward, simplistic gameplay.

There’s really no goal to the game except to unlock new boosts and new cars (of which there is very limited selection). Some of the end-game cars are extremely expensive, so you have to be up for the grind. There are also achievements to work for, but it’s hardly an incentive to keep playing. 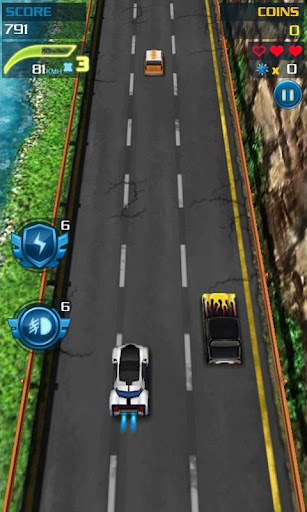 Gameplay is mindless, but fun. To sum it up, Speed Racing is a good time killer. Don’t expect it to capture your attention for long periods at a time, as there is very little to do outside of racing this straightaway.

The scenery of the track does change, but the graphics are hardly anything to talk about. The sound effects do get quite annoying, particularly the engine’s high-pitched buzzing.

At the end of the day, you get what you pay for. And Speed Racing is a free-to-play game so don’t expect much. It’ll keep you busy for short periods, but don’t expect anything out of the ordinary with this one. It should be noted that ads do support the game, but they aren’t annoying and do not pop up everytime you finish a game.