Brave Frontier has added three new characters, now available through the Rare Summon gate: Defiant Luther, Crusher Uda, and Evil Kajah, “Gods that came back for revenge with other gods.”

“Conquer the battlefields with them and be recognized as a Legendary Summoner,” developer Gumi says.

Below are the stats for each of the new characters, including their Leader Skill and Brave Burst. 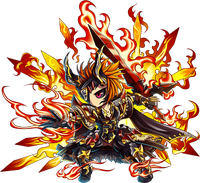 “A fire god who tried to rebel against the higher ranking gods and paid for his transgression through a long period of incarceration. During the great war he continued to battle from the front lines, preferring to attack capital cities with gigantic fortresses and other similar places. Another account states that in order to satisfy his desire to destroy, he chose to fight in places that could take a lot of damage. Mercilessly burning everything that got in his path, he sent a shudder down the spine of every soldier.”

“A god that was once imprisoned by the other gods. When he descended to the battlefield, the armed forces he led won a series of battles one after the other. With his treasured sword on one hand, he showed absolutely no mercy to those who surrendered to him, including women and children, slaughtering them all. This made him a horrifying sight for human eyes. It is also said that whenever he found a powerful human on the battlefield, he would challenge that person to one on one combat, though the reason for this remains unknown. Some accounts state that he might’ve fought weak warriors in order to reconfirm his own power.”

“A god that was once imprisoned for having committed a grave crime. Originally the god in charge of judgment, he came to be known as an evil god after committing a crime himself. While imprisoned he learned that Zellha had descended to the battlefield, and concerned about the amount of damage that she could cause above ground, he asked a certain bad-mouthed, yet trustworthy, goddess to stop Zellha. Afterwards, during the great war between gods and men, he received orders from the higher ranking gods and followed them to the letter without any complaints or remarks.”

Great boost to Atk of units with 25% HP or less

Each of these new characters can be unlocked through the Rare Summon Gate which right now has Increased summon rate for Luther, Uda, and Kajah.

Additionally, “Super Rare Summon Rates Up” is activated from August 30, 07:00 to September 1, 06:59 PST where you’ll be able to summon minimum of 4-star units and above. There’s also a small chance of getting any of the previously released 6-star units.